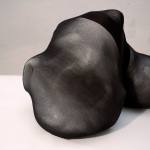 Untitled and in Progress

At the time, I had edited a couple of pieces out of the series as the forms weren’t quite right. I held onto them though, in the hopes that I would be able to find some sort of closure. The problem was that the forms had more of a subtractive quality to them as if they had been carved rather than being built from the inside-out (they were made with individual pieces that were wheelthrown and then put together with added handbuilt forms). 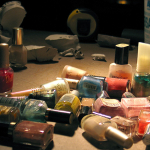 Wall Prosthetic In Progress I actually got 8 full hours in my studio last Saturday. It felt like the first stretch after one wakes up, except for 8 hours. I started with the wall prosthetic I began 2 years ago. It started to come together pretty quickly as I’m more in need of finishing it […] 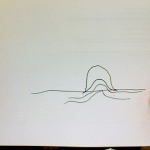 No Time To Be Creative

This is the most creative thing I’ve done in the past 2 weeks. It is an illustration drawn for a coworker of a massage technique that bruised the shit out of my neck. My poor cat is having a really hard time since her surgery and I’ve been taking care of her full-time. 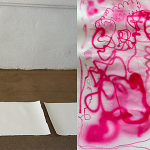 A Day of Work

Had my first day of working in my studio. I know every artist goes this but it’s always humbling and worrisome when the thing in your head turns out to be a turd in the studio. I didn’t have quite that experience but using a little hyperbole helps to place it a little more clearly […] 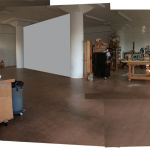 I Photoshopped the the wall in there for now. I really can’t wait to build it but I wanna get some stuff started. I don’t actually need it yet anyway. Soon though. I’m also going to build a new table as this one is on it’s last leg (none intended). I built it in 1999 […] 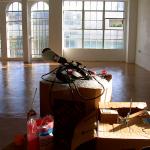 Spent the day rolling on polyurethane with Brant today. What a back-breaker that is. We got about halfway done and we’re high as hell from the oil base fumes, and not a good high I might add. We decided to finish up on Wednesday. Soon, soon, soon this place will be ready. After the floor […] 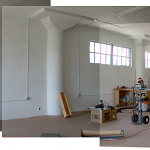 I’m finally out of my old studio and getting things arranged in the new space. It has been slow because of a couple of busy work weeks. Still some work to do before I can start making. Drilling for water. The building manager says we can drill through the floor to plumb into the water […] 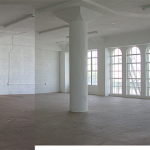 Moved into a new studio this weekend with a guy named Brant Lavalla that I met via craigslist.org. I’m really excited and exhausted (long work week as well). The guy in the picture is the building manager, Mark. He’s standing on the side I chose, divided by the 2 pillars in the center. The place […]

A Visit To LACMA

E and I visited the Los Angeles County Museum of Art this past weekend and I shot a few pictures of pieces that had an impact on me. Of course, the collection was so large that I had no time to record the credits/captions of each piece, much less spend time with everything that piqued my interest. 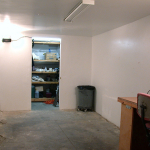 Took me and E a few days to get the old studio packed up and moved in. The hardest part was/is figuring out the most logical way to cram a bunch of sh*t into a small space and still have easy access to what I need without having to move everything around each time.