A lot of my current direction was facilitated by the University of Texas at Dallas/Southside residency program I was in right after grad school (2004-2005). I was accepted with the ceramic sculpture that was completed for my graduate thesis.

The scape-down was necessary after a thick application a couple of weeks before. I’m more responsive to this now. The color still isn’t quite right (I liked it better before, more muted) but the effect is closer. I’ve cut out an outline as to where the main form will be moving. 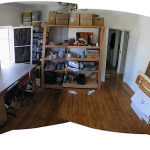 So far, LA has been great. Getting settled has taken some time but we’re almost done. I plan on getting to work in my new studio this week. Which brings me to the subject of this post. My studio practice as been highly neglected for some time now (I hate saying how long).

Not Going As Expected

The formulation process has been a bust. So has the amount of time I’ve have been able to dedicate towards formulating (lots-o-changes around here). My original idea was pretty trite looking back. Very idea centric with no focus on the visual aspect. The two just haven’t communicated well. 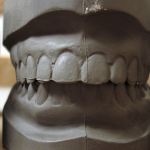 I have 17 sets of teeth now and no idea how I’m going to finish them. When the project was in my head it all made sense. Now that I’m actually moving forward on the piece I’m having to rethink everything I originally decided. 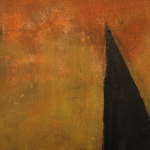 Above is the start of a series of paintings inspired by the window paintings I’ve written about in the past. Still new to painting and so far I’m energized by the process. The ability to “sculpt” a surface with paint is very similar in execution to my past work with clay. 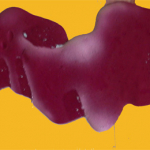 This was made during my time in the UTD/Southside residency and I just came upon it while cleaning up my computer at work. ItÃ¢â‚¬â„¢s a small piece of masonite with thickly poured acrylic and airbrushed with nail polish. I put it up in my studio and eventually photographed it to try out a few ideas in PhotoShop. 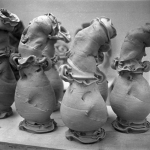 After looking at my reworked sketch for a while and not convincing myself of whatever it is I need to in order to feel successful, I began to see a correlation with the process I used when I started working with clay during undergrad. 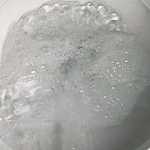 This image has certain associations that I’m not trying to deny, but instead add to or expand upon; bring out something hidden in a way that uses common associations as a foundation to produce a richer experience. 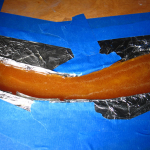 So far I have had two successes. The third attempt never cured (poor mixing job). The image on the left shows the top of the mold. The aluminum foil is to keep the urethane (amber material) from sticking to the wood. On the right shows the cast after I took the wood top off.