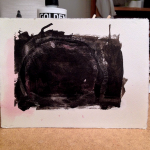 I made these a couple of years ago and they’ve kept their spot on my studio wall through many sessions where I’ve pulled down things that either I’ve already absorbed or have lost my attention. The first one (black mass) has evolved over time. The fact that I can still make out the original […] 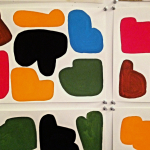 Needed to quickly get some shapes out my head. Either it’s a gouache limitation in general or the brand I’m using has issues. The cool hues I have simply require layering to get to the same opacity as the warmer ones. 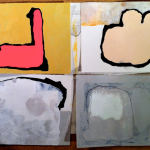 Small drawings on paper (in progress and not necessarily right-side-up). Just a quick post to show some of what’s been going on lately. I’ve been on vacation for the past week, trying to spend most of it in the studio. Not much to say otherwise, except that things are starting to come together. 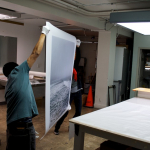 Flipping the print over so it could be rolled up and placed in a tube for the trip to the framer. I’m in the process of getting negatives drum scanned for a new body of work that will be comprised of a series of large-scale (at least 48″x48″) composited images. This will be the first […] 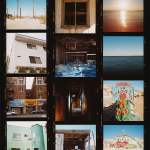 An Ode to My Hasselblad

Contact sheet from my Hasselblad’s last roll. Sorry for the dramatic title. The above is the last roll I shot with my Hasselblad before it died. Its mirror arm has snapped and fixing it would cost more than the body is worth. Don’t fret though, I’m going to get another. It’s just that I hate […] 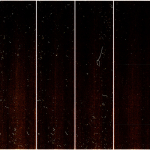 Four successive scans without film. I’ve been scanning, and scanning, and scanning. The more I do it, the more sensitive I become to little things that interrupt the image, dust and hair. I’ve bought canned air, white gloves, and microfiber rags, but I still can’t seem to get a predictable reduction in the amount of […] 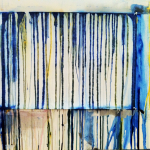 It’s been a while since I’ve been to my studio. But I am now on a month-long vacation and I have big plans. Along with the photo compositing I wrote about earlier, I’ll be working on a series of works on paper. Here is one that has been ongoing for a long time now. And […] 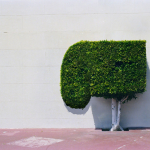 Scanned and altered photograph Among all the projects ongoing (and collecting dust) in my studio, I’ve been thinking about a photo series as well. With the recent purchase of a Hasselblad and the long hours at my day job, making photographs has been the most accessible creative output for which I’ve been able to make […] 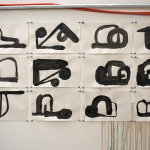 Ink on paper Needing to get some things off my mind, I tore down some sketchbook paper and started drawing whatever came out. Together they look like hieroglyphics but as I drew them they were just forms and compositions that had been swimming around. I remember the Art of the Maya class I took in […] 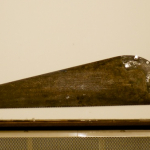 Some Heres and Theres

Just a quick post to keep things alive around here. I’ve been getting to the studio a lot more lately. Things have been going smoothly. Not much else to say.