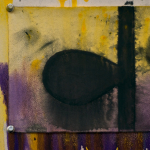 Still sketching. Trying to add more color. No idea will this is leading, if anywhere. I’ve realized that I don’t need to know, as long as I just keep making whatever it is I want to see. This way of thinking has helped me to relax and experiment more. I’ve found that I like using […] 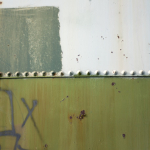 After going through my phototblog I realized I base my compositions on form and color pretty equally. 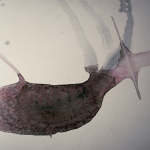 n most cases I do a single pour and leave it at that, but after multiple floods, I see the result has a more layered, intricate and detailed composition. 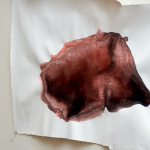 My studio neighbor came in and said “Ah! Meaty.” After looking at it for the past few days, I would agree. The pinning of canvas gives a strung-up-hide look as well. 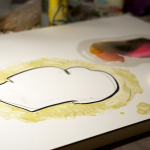 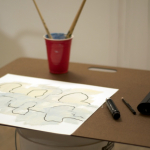 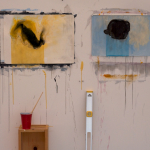 While I feel like I’m going in a lot of different directions, I’m most likely not, but what I’m looking for is attachment. Attachment to a shape, color, mark, relationship. 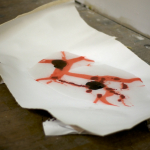 For some reason the first thing I do when I get to the studio is take a nap. After that, I make a pot of coffee and things get movin’. Today went well. 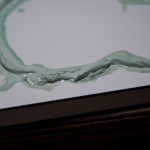 Latex moat on clayboard This attempt has more promise than the last. I used clayboard instead of gessoed paper (no buckling, hopefully). Instead of a huge bead of latex, I put down a flat border and then used thin, twisted paper (coffee filters, it’s all I had around) and dipped it in latex. When I […] 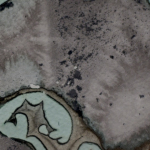 Dyed liquid latex resist and ink (detail) I’ve been working on a way to contain a pool of liquid on a surface. The above detail was a failed attempt which yielded a nice surprise. I used liquid latex (used for applications similar to wax resist in ceramics) that I’d dyed blue. I’ve had this stuff […]