Been meaning to finish this for a while. 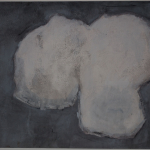 State of the Studio – 8 Sketches

I’ve been doing a lot of drawing/painting lately. It is definitely a new experience for me. I first started out thinking that everything I began was going to have and end, that is, a mostly successful end. Instead, I’ve learned that everything has a peak at which point I have to make a decision about whether […] 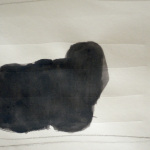 I’ve been working on a handful of drawings but this sketch represents the opposite end of the spectrum from them. I feel like I’m slowly honing in on what best describes what I’m thinking. It’s easy to feel like I’m on to something when what I’m working on starts to take some sort of recognizable […] 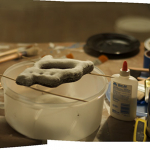 Layering an old saw handle with salt. I’m dipping and coating things. Salt builds up a nice surface. On the right are a few small samples using different glues, epoxy, spray adhesive and Elmer’s. The Elmer’s won out. It stays white. I want the coats to eventually change the form to where it’s unrecognizable. I’ve […] 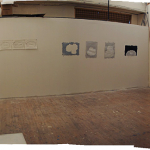 Not much to say except that I’m taking a slower, more layered approach to these drawings. Trying to build up the image over a longer period of time. I also painted over the last one. I have a clearer idea (although, it’s still pretty fuzzy) for them. I’m trying to post more. I don’t always […] 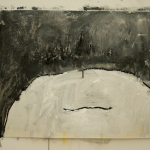 Untitled | gesso, charcoal, ink on paper | forgot the dimensions After growing a bit frustrated with the wall prosthetic I talked about in the last post, I decided to do more drawing to flush out some ideas that have built up. I tend to try to think my way through problems instead of working […] 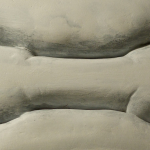 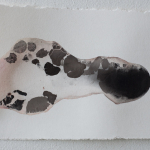 This is the progress since I originally started it long ago. Slithered in water putty after I spent an hour sanding off the liquid nail I used to adhere it to the masonite, this future wall prosthetic’s next step is another sanding, and as you could guess, it’s gonna be a doozy. 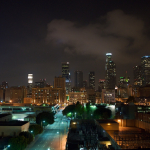 View of LA at night from the roof on my studio Not much studio progress to speak of. I have a few things in-progress that are about halfway finished though. CAA is coming to LA in February and I’m looking to get enough work done so I can have a little shindig at the studio […] 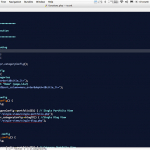 My development environment No studio time this week. I had a really long week and went to bed every evening at around 9pm. Felt really nice to just fall into bed that early, knowing I didn’t have to be up until 9pm the next morning. It took all week to catch up on the sleep […]