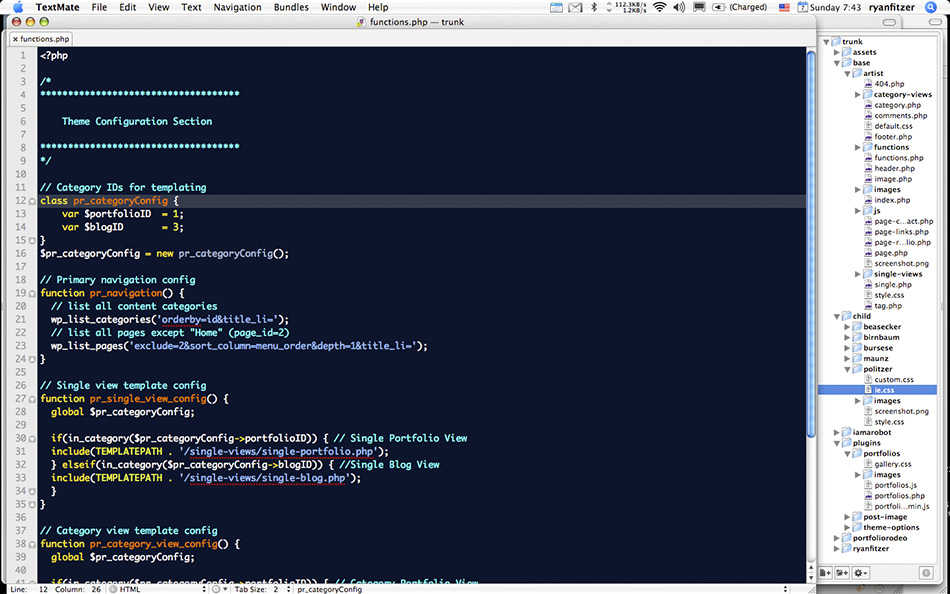 No studio time this week. I had a really long week and went to bed every evening at around 9pm. Felt really nice to just fall into bed that early, knowing I didn’t have to be up until 9pm the next morning.

It took all week to catch up on the sleep I missed out on while camping in Joshua Tree last weekend. And yes, we really did freeze our F#@king asses off. More so than I imagined. We only had two thin blankets each and the nighttime temp was at least 40°. Doesn’t sound too cold, but believe me, it was.

I’ll post some pics soon. I had them ready to go but my trial on Aperture ran out before I could export them. Now I need to come up with $ to buy the app (which is very worth it). When that happens, many a beautiful picture will be posted.

So, my Sunday (and Saturday) has been spent making websites. I never post much about it because I don’t think most people want to read about coding, but I found the above image nice enough to post.

The application I use is called TextMate and it allows you to customize the look of different types of code. After spending a while working in black on white I switched to light on dark. Over the years I have tweaked the colors to suit my needs which is what your seeing, my personal theme. Kinda corny, but pretty none the less.

I’ve also been working on a new version of this site’s design and functionality. Hopefully I’ll be able to finish it over the holidays (I’m pretty far along). That is, when I get my client work done. I have at least two weeks off for the holidays and I plan on spending the days in my studio and the nights on web development.