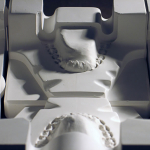 I had the idea for this in grad school so I bought a plastic arch from an online dental supply store and sat on it until last year. I finally got around to mailing it off to a friend Mathew McConnell, and just got it back this week (boy did he take his sweet time, but it was definitely worth it). 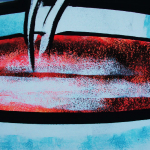 Day-glow window paintings have been calling my name lately. Of course, this is the main goal of such signage, but more and more, as I pass by day by day, I start to really wonder why. Is it just the color? Maybe the big, chunky forms used in the lettering? 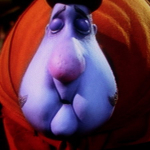 I snapped this the other day while watching Tim Burton’s “Corpse Bride”. Not that great of a movie but the some of the characters were beautiful. The special feature section where they show how the characters are made is worth the watch. It was probably the most engaging part of the film. This form might end up somewhere, or not. 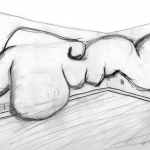 Here’s an old drawing I did when I was in the UTD residency. We were given these gallery spaces at the front of the apt. to use either as a studio or clean space to show our work. The idea with this piece was to fill a small space with very large blob-like forms coming out of the walls. 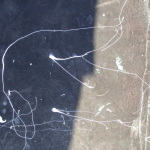 This image is of a rooftop surface in Queens, NY I shot 2 or 3 years back. I take a lot of photos which act as a sketchbook entry. In my case, images usually do a better job of bringing back whatever it is I was thinking about at the time much better than words.