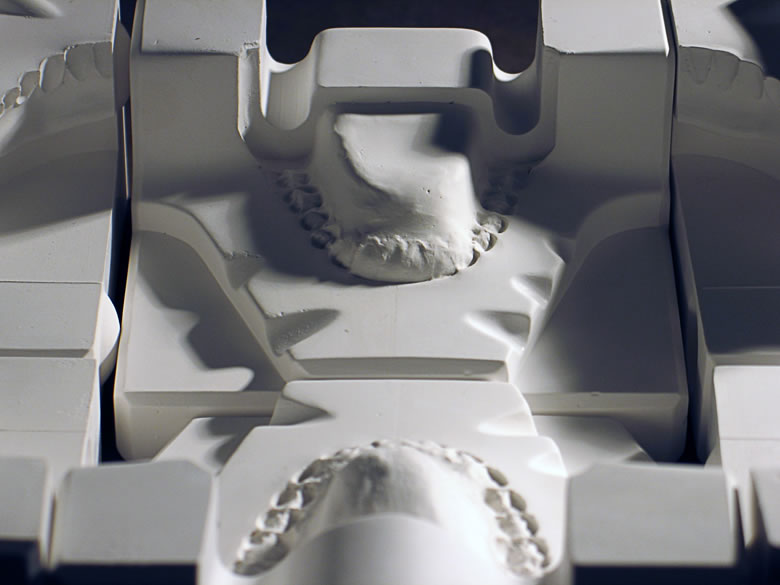 I had the idea for this in grad school so I bought a plastic arch from an online dental supply store and sat on it until last year. I finally got around to mailing it off to a friend Mathew McConnell, and just got it back this week (boy did he take his sweet time, but it was definitely worth it). The idea has been simmering for 3 years now and, as of recently, IÃ¢â‚¬â„¢ve been pretty anxious to get started.

A lot of my work is inspired by things I find both compelling and grotesque. Grillz definitely fall into this category. Since moving to Dallas IÃ¢â‚¬â„¢ve been exposed to this trend more than any other place IÃ¢â‚¬â„¢ve lived (something about the “Dirty South“). My interest stems equally from how sensational the designs are and the fact that people wear these on something as sensitive as teeth. I find it one of the most visually aggressive ways to ornament oneÃ¢â‚¬â„¢s self while still remaining relatively acceptable in the mainstream.

By themselves they are pretty formless and unattractive. As jewelry, the lack of precision heavily contrasts with what I normally consider as valuable; most of the examples IÃ¢â‚¬â„¢ve seen have a very heavy handed craftsmanship that sometimes borders on clunky. The “more is better” rule is certainly being applied here.

Size is another issue. Some of these are so massive that they impede normal speech and keep the wearer from closing their mouth. I remember asking an employee at Kroger where his set was made and needing him to repeat it multiple times, “Muh-sheet… Muh-schckeet… Mesquite”.

But on the other hand, there is something so compelling about seeing someone wearing a set. Somewhat like a train wreck, I have trouble looking away (yeah, like I’ve seen a train wreck before). But that’s only a small part of it. I have a sort of anthropological interest that comes close to redeeming the characteristics I described above. Culturally they’re exciting, creative, imposing, and ultimately, human.