Some Faces, Photos from India

The fifth installment of images from my 2 week trip to Bangalore, India. The following were taken Wednesday November 10, 2010 (day 4). 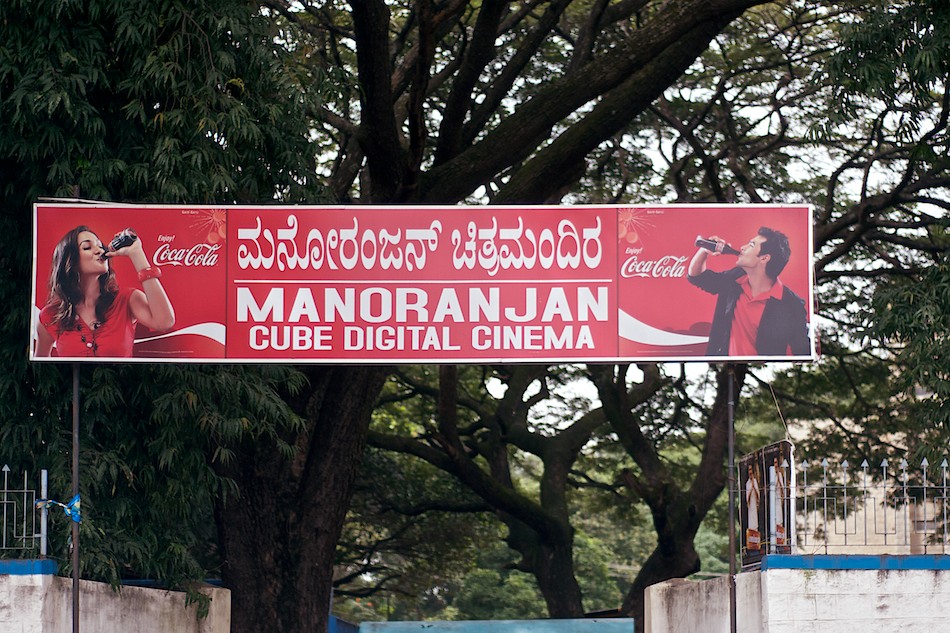 1 Like in the US, drinking Coke makes people pretty! It was interesting to see how advertising trends differed from America. I saw many like this, light-skinned, shinny-happy people with collars usually popped, and often jumping into the frame. The compositions were always busy, packed with text and color. It felt odd as these models really didn’t represent the majority of people I saw. I figure it’s the same for foreigners in the US. Americans are bombarded with the equivalent, but maybe we’ve lived with advertising longer and as a result, the models (mostly) seem normal. And ferrr sure, when I look around, Americans definitely don’t look the part. 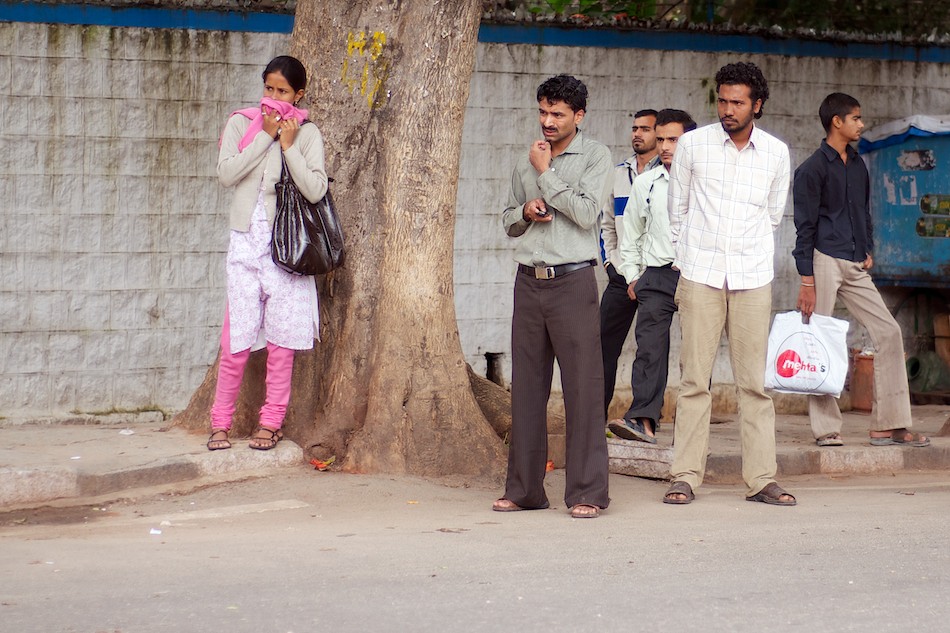 2 Morning commuters waiting for the next bus to arrive. Traffic is tight and since cars can quickly swoop in and out to jockey for position and from what I was told, the least agile of the vehicles, buses, make up for it by having some sort of legal immunity when it comes to fender-benders. It makes sense as long they don’t rogue. I’m sure LA buses would go hog-wild with power like that. 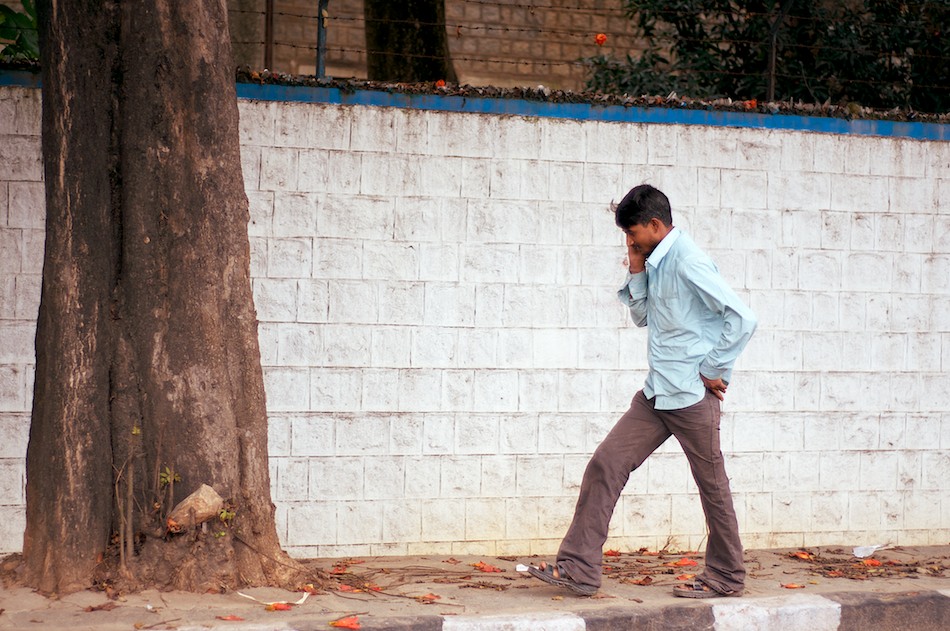 3 Pedestrian making his way to the bus stop. The reason I found this shot interesting was the security feature on the wall behind him. Look closely and you’ll see the broken glass cemented to the top to further deter whatever the barbed wire doesn’t. 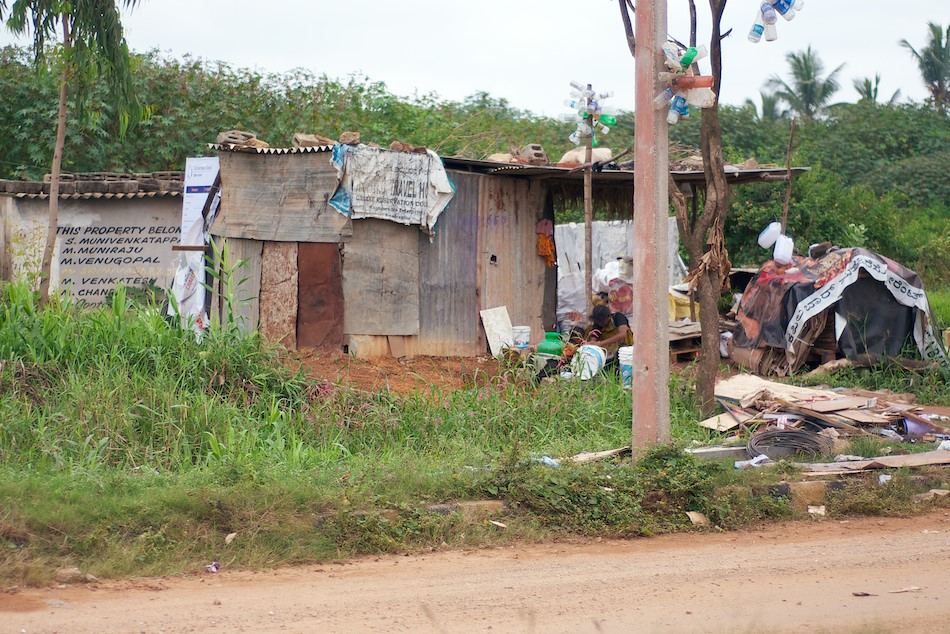 4 I passed this place everyday, but I never asked if Srinivas knew what it was. My assumption was a home. In the mornings I would usually see a women, sometimes with a child in sling, going about standard chores. A few times there was a man doing the same. What didn’t make sense though, apart from the obvious, was that these homes (there was another just out of the left frame) were isolated on the frontage road of a busy highway. There was nothing else around them. My first thought, from the bottles in the trees, that it was a recycling station. Each day I passed, it looked more and more like a home. Notice the “THIS PROPERTY BELONGS” message on the back wall. Maybe they often get mistaken as squatters. But why is it in English? 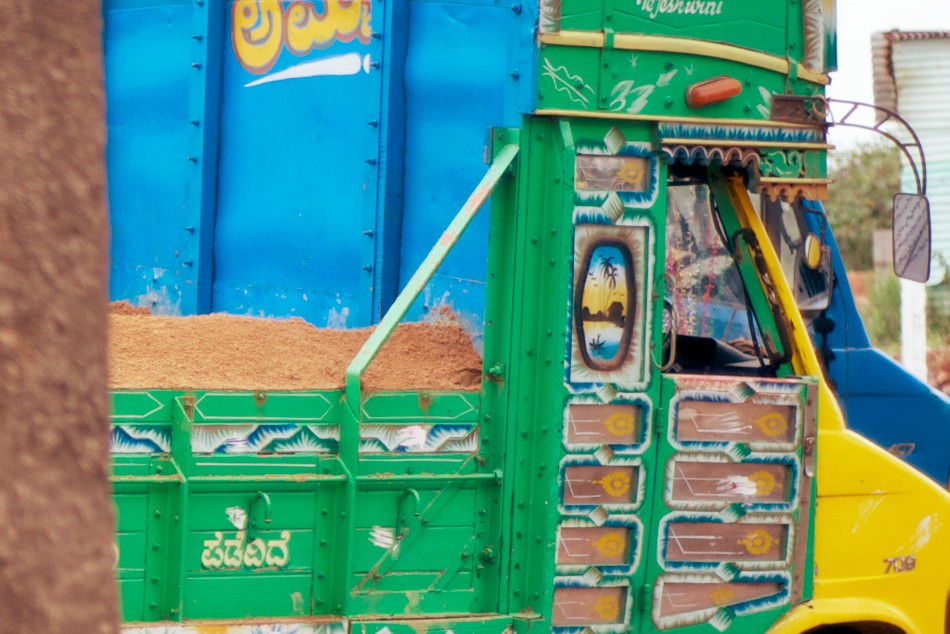 5 Detail of the hand-painted artwork that decorates commercial trucks. They need to be careful, that beach scene is a gateway drug to more expressive variations. 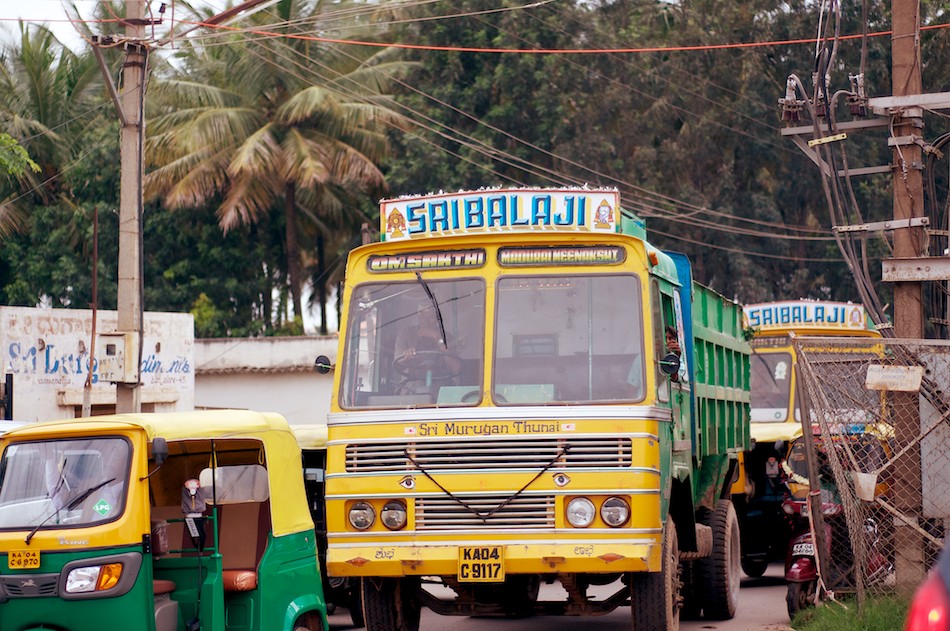 6 From wikipedia, Balaji is another name for Venkateswara, the sin destroying form of Vishnu. Along with the sharp glass adhered to the sign, these trucks make for an interesting metaphor. 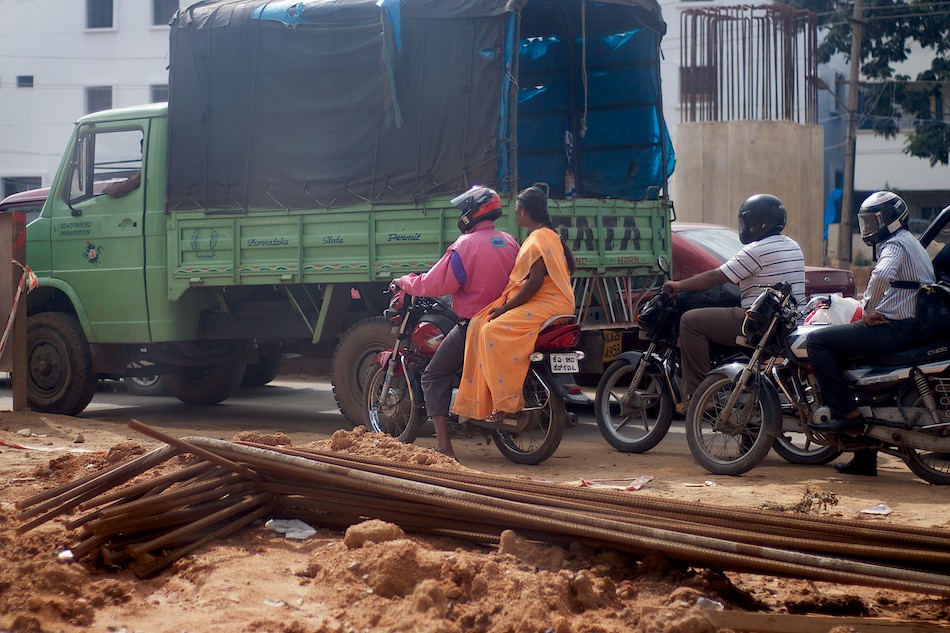 7 Every time I saw a women riding sidesaddle, the fear I felt during the one (and only) time I rode on the back of a motorcycle came rushing back with a vengeance. I couldn’t help imagining what it must have been like (in pants, of course), thus spawning that special little tingle in the nethers that happens when I’m looking down front a really high ledge. 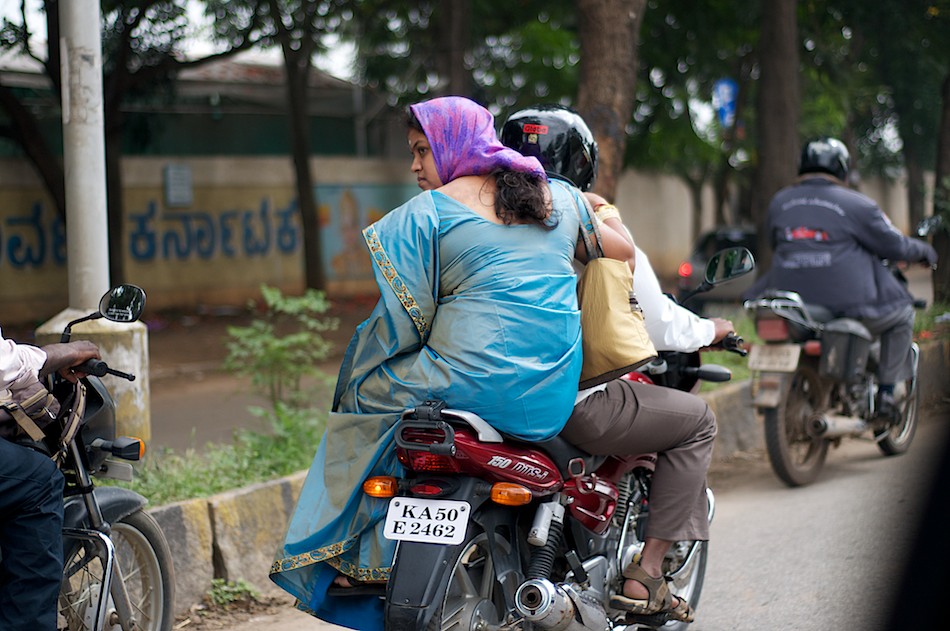 8 The iridescence of her sari is set off by the drabness and functionality of the motorcycles and cement. 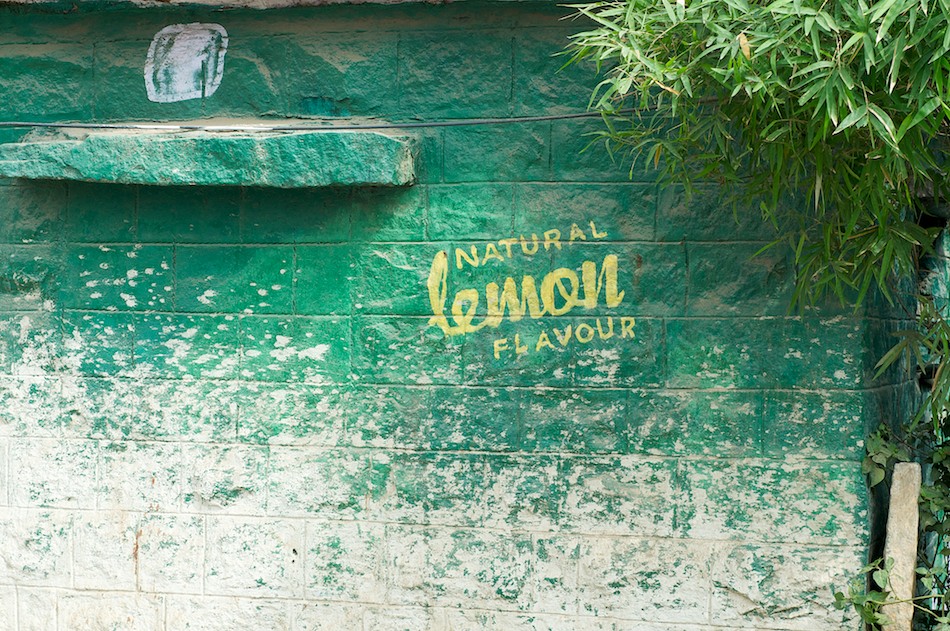 9 That natural lemon flavor could use a hose-down. 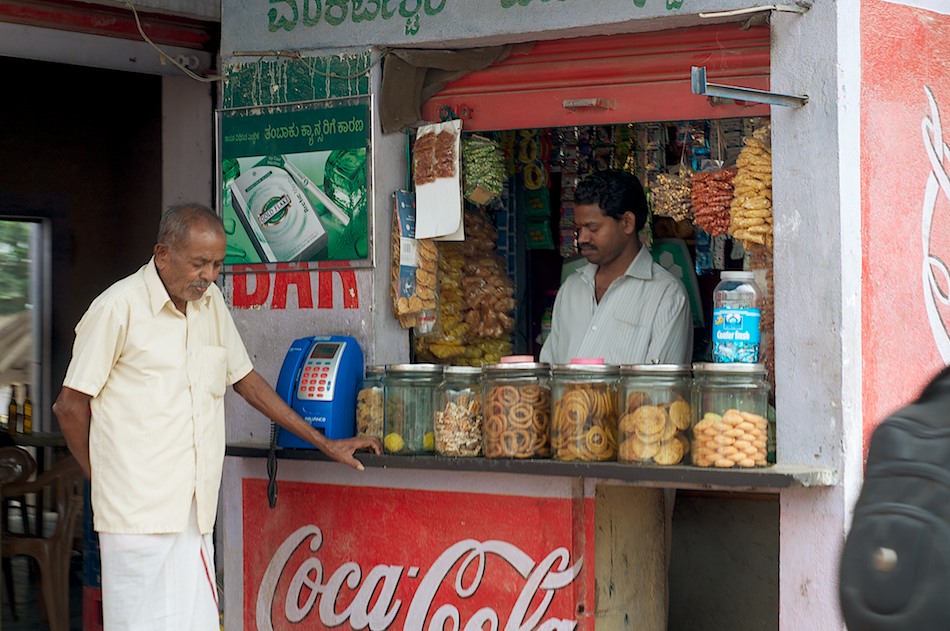 10 So as not to displease, Balarama waits for the shopkeeper’s distraction so he can secretly take care of the sample accepted out politeness. 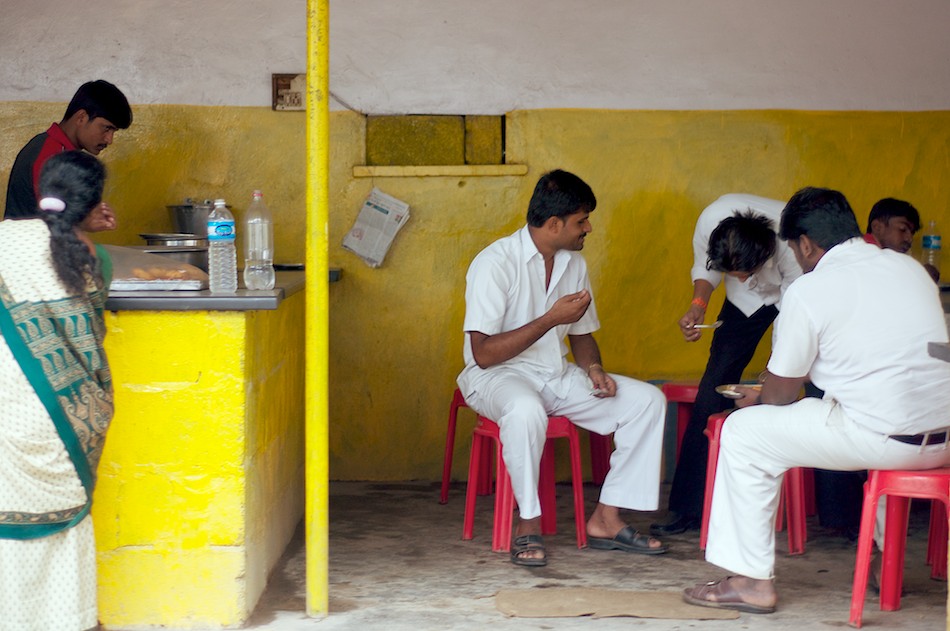 11 Friends having breakfast together. My driver, Srinivas, wore the same white outfit, which makes me think this is a group of taxi drivers. 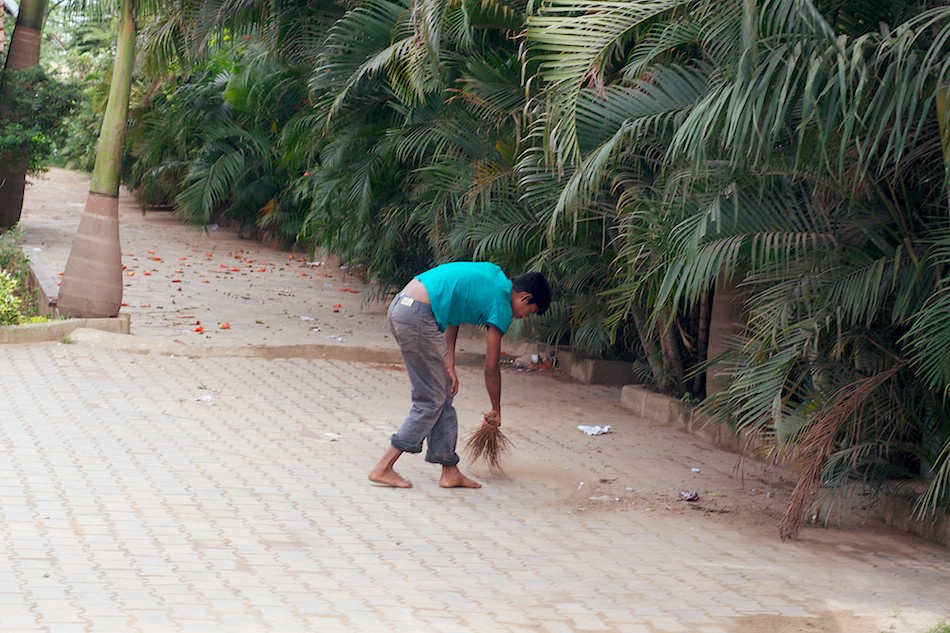 12 While efficient, these brooms looked like real back-brakers. At least for my back anyway. 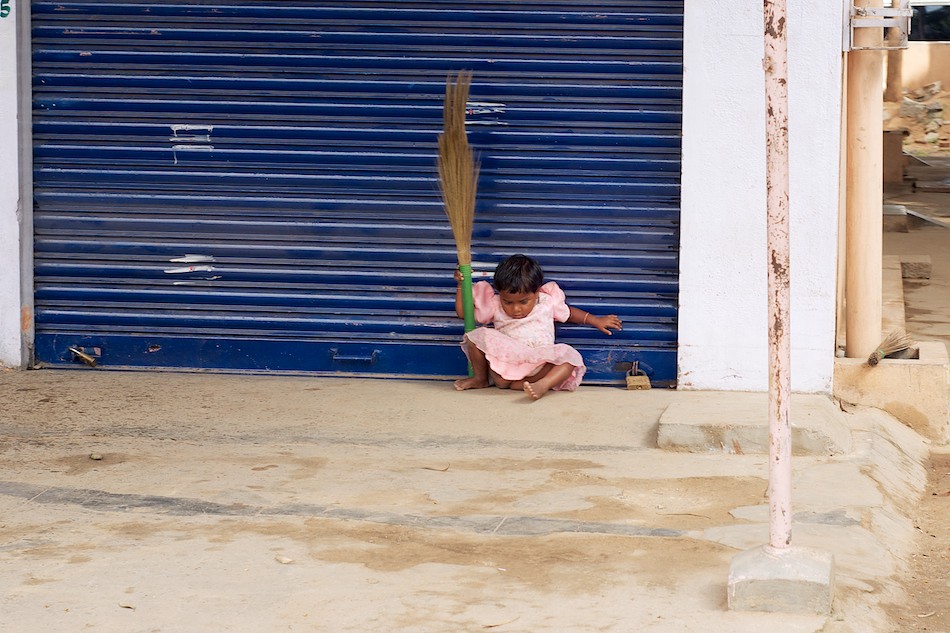 13 This little girl was too cute. I was just sitting in traffic watching her try to use that big broom to get up. It took her a few tries. 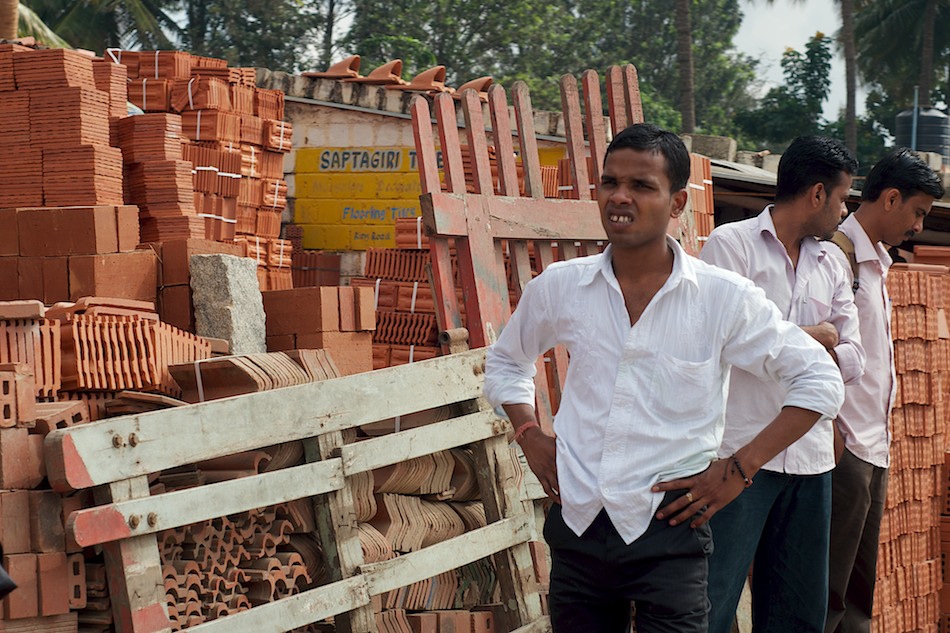 14 Not sure if this was a makeshift bus stop or these guys were waiting on their carpool. 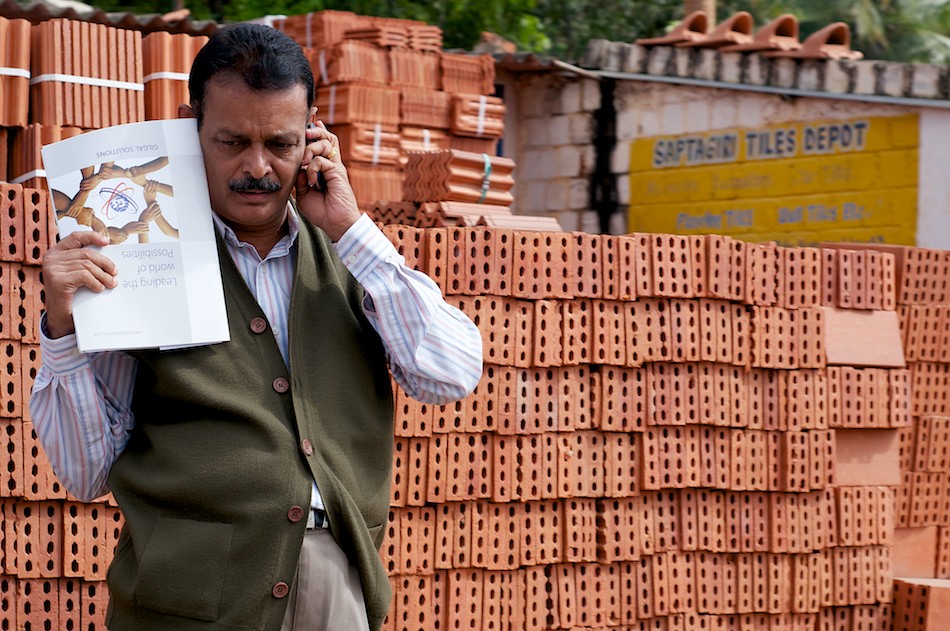 15 Nitin, thinking he was on the right path, is confused to hear that his “Helping Hands” design is not specific enough to properly evoke the “extreme ambiguity” of the Gilgal Solutions brand. 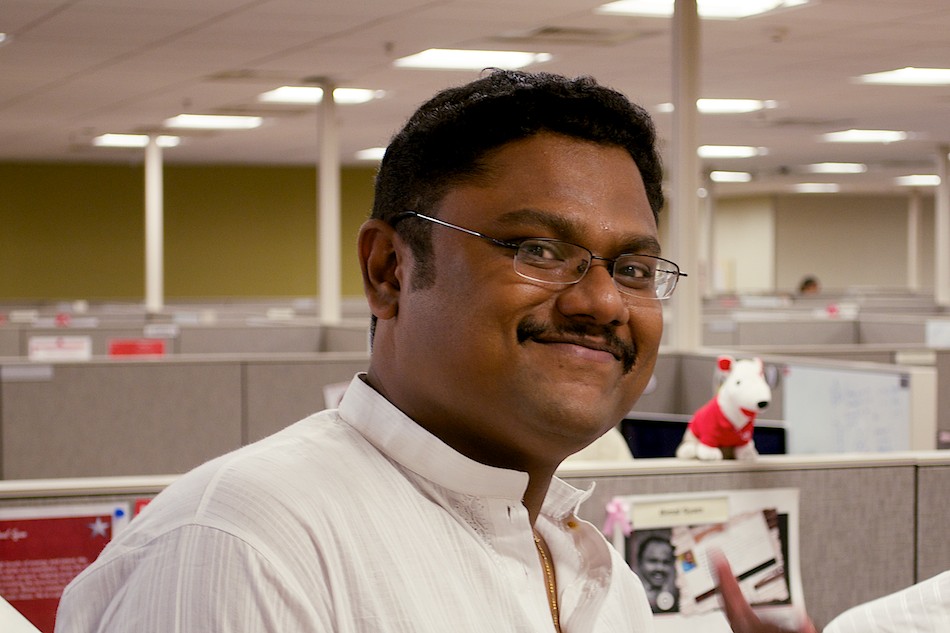 16 Padmaraj, one of my colleagues. I didn’t get to spend much time with him due to his contracting dengue fever 4 days into my visit. The updates we were given during his stay in the hospital sounded horrific. With a nickname like “breakbone fever”, you can easily get a good idea of what he went through. 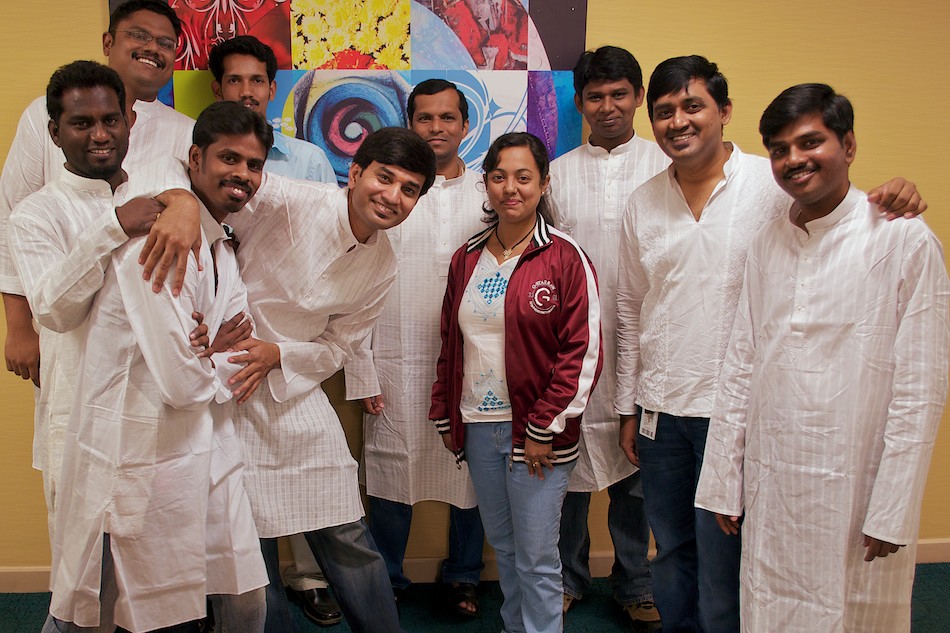 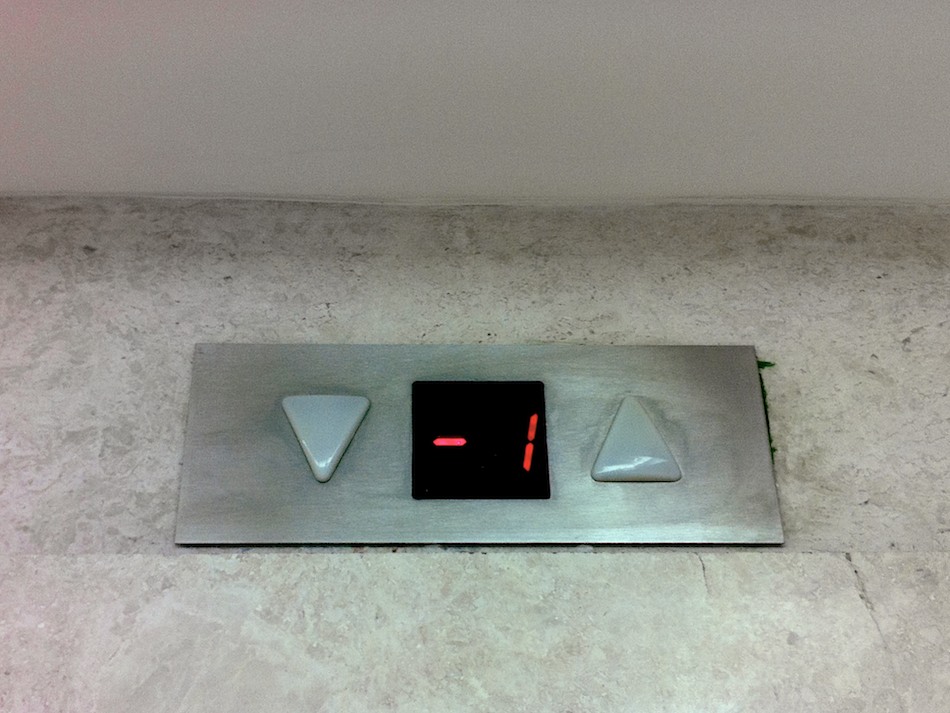 18 On on my way to lunch, I appreciated the elevator’s honesty. 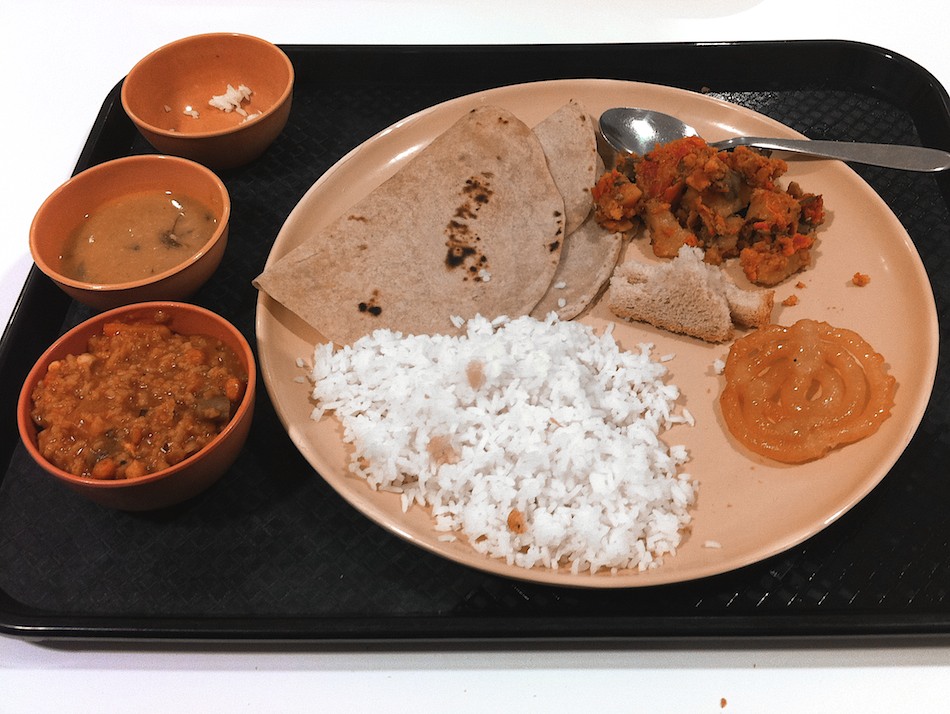 19 My standard lunch for the first week. While cafeteria food in the US is known to be pretty bad, this stuff was really tasty. Only experiencing Indian food in the US, I expected to be blown away when I got to India. The truth is, it tasted pretty much the same. What I didn’t expect though, was to be totally overwhelmed after the first week. My weak little taste buds, lazy from all of the bland grilled cheese, egg sandwiches and bean & cheese burritos, were not strong enough to weather, for every meal, the extremely rich Indian spices. So, unfortunately, my second week had to consist of veggie burgers with french fries, Domino’s Pizza (which tasted exactly the same) and really bad fettucini alfredo.