The fourth installment of images from my 2 week trip to Bangalore, India. The following were taken Tuesday November 9, 2010 (day 3).

Like I wrote in the last post, the majority of my first week of pictures were from the back of the taxi. Most of my coworkers used them as their standard transportation to and from work. No reason to drive yourself if one of the perks of employment was a paid taxi service.

Except for the first day, I had the same driver, Srinivas, for the whole the trip. He picked me up at 9am and dropped me at 10:30pm, everyday. Even though his English was pretty much non-existent (like my Kannada), we got pretty good at communicating. We both seemed to enjoy the challenge of trying to find simplistic words or symbols that were loaded enough to stand-in for elemental concepts we both, regardless of culture, understood. He was a really great source for insight into some of the things I was seeing from the backseat.

He wanted to make sure that before the end my trip I got a picture of him. When the time came, it was 4am and we were at the airport. I was stressed from functioning on 1 hour of sleep and didn’t have the energy to dig out my camera and snap one off. I’m sorry I didn’t. 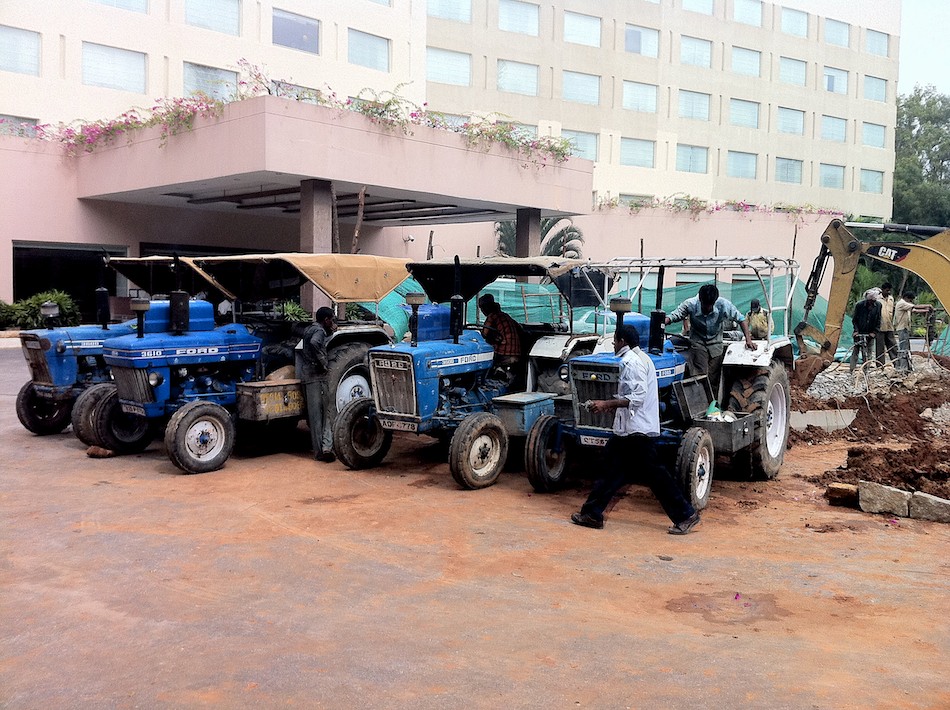 1 My first hotel looked nice at first, but as you see from the mess out front, it wasn’t optimal. It was the little things that bugged me, jackhammers at 6:30am, temperature control that didn’t get above 58° fahrenheit, and rooms that knocked you down with the smell of mildew (I tried three different rooms). Look closely, my room is the one with the shades fully open. An insomniatic eye with a front row seat to the action. 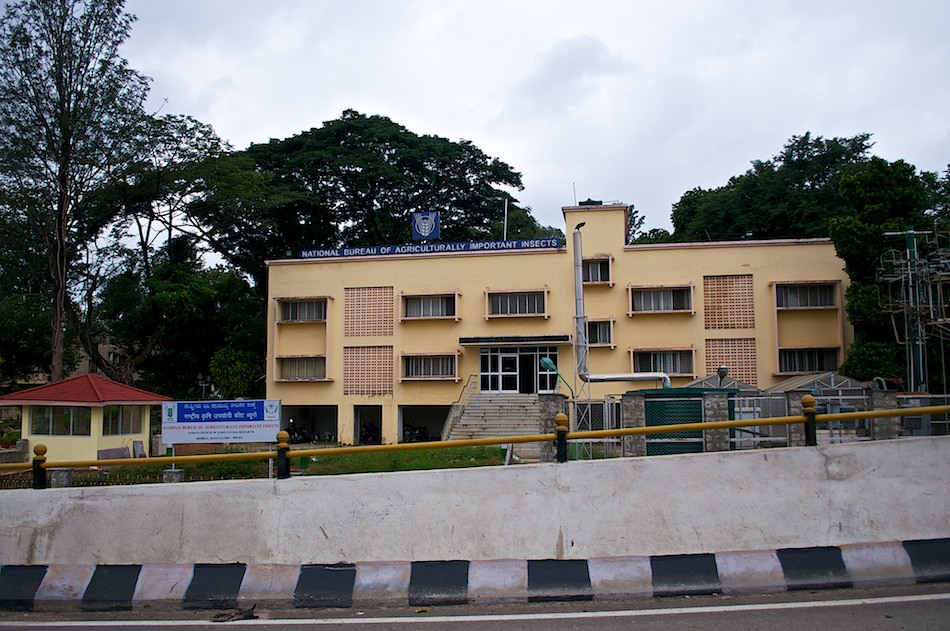 2 Another interestingly long name, “National Bureau of Agriculturally Important Insects”. Muted yellows were the popular color for government buildings. In LA, it’s gray cement. [Update] Gopi emailed that the yellow is in reference to the the holy colors of yellow and red, respectively meaning peace and courage 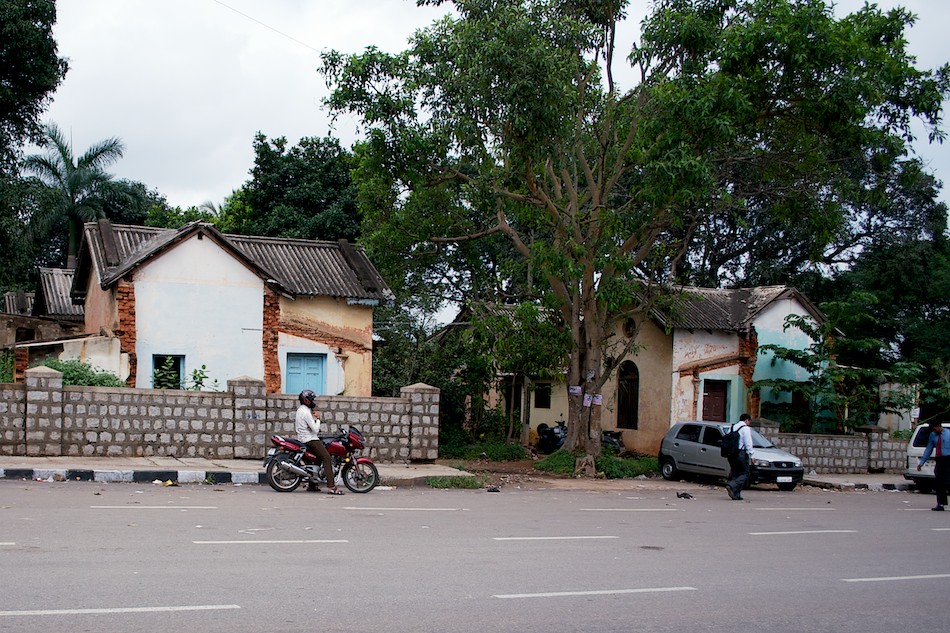 3 Twin homes that got the twin treatment (with surgical accuracy, no less) when, what looks to be, a road widening was needed. They probably didn’t need that pesky extra room anyway. 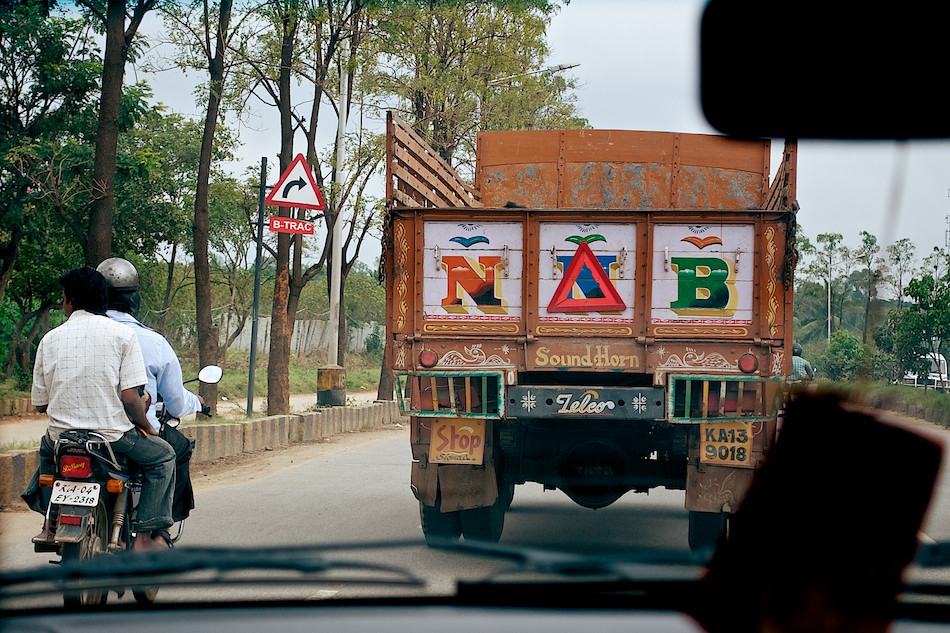 4 All commercial trucks were ornately painted. I would have loved to get more up-close shots of the work. From what I was told, they were only allowed on the road at night, if hauling, due to congestion and pollution. Trucks were usually lined up along the side of the road during the day. Another feature every truck displayed, the “Sound Horn” directive. As if Indian drivers need to be told to honk a horn. You’d think they were getting horn-honking royalties they way they laid on it. Srinivas was amazed that it was the opposite, and even seen as rude, in America. My little brain was fried from all the horns when I arrived to work every morning. Some even had a sped up UK-style police siren, de-da-le-da-le-da-leeeeeeeeeeee! 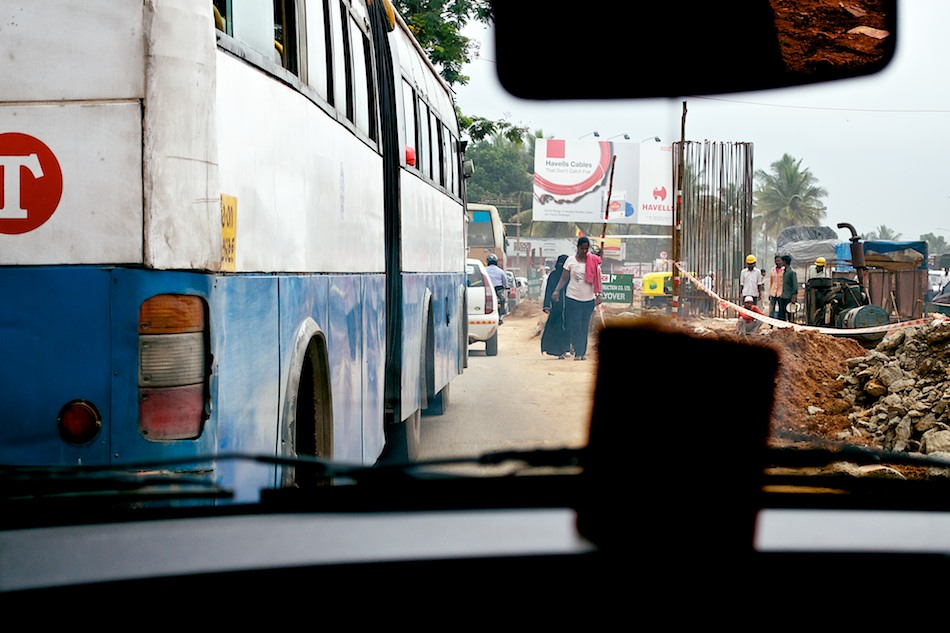 5 Construction on the aforementioned “flyover” created heavy traffic where people, and cars, were put in precarious situations. At one point we came within inches of knocking a motorcyclist off the road while going 30-40 mph. I squelched loudly, only to have Srinivas laugh and tell me that “3 centimeters” was considered close. And he was right, the motorcyclist just looked at us nonchalantly as if he didn’t even notice his near-death. 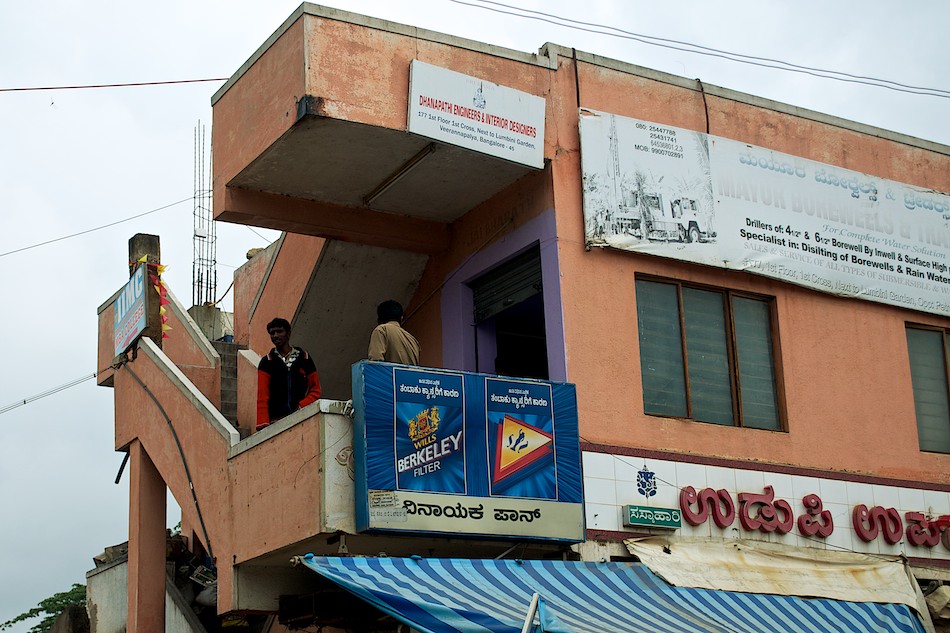 6 Notice the rebar at the back-left corner of the building. Many on the buildings we passed were started, but never finished. 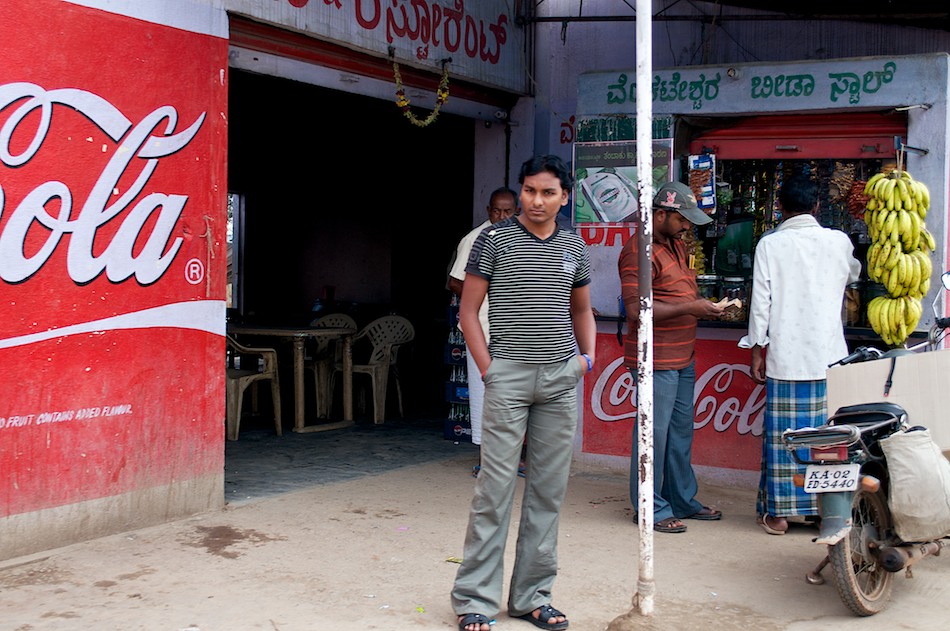 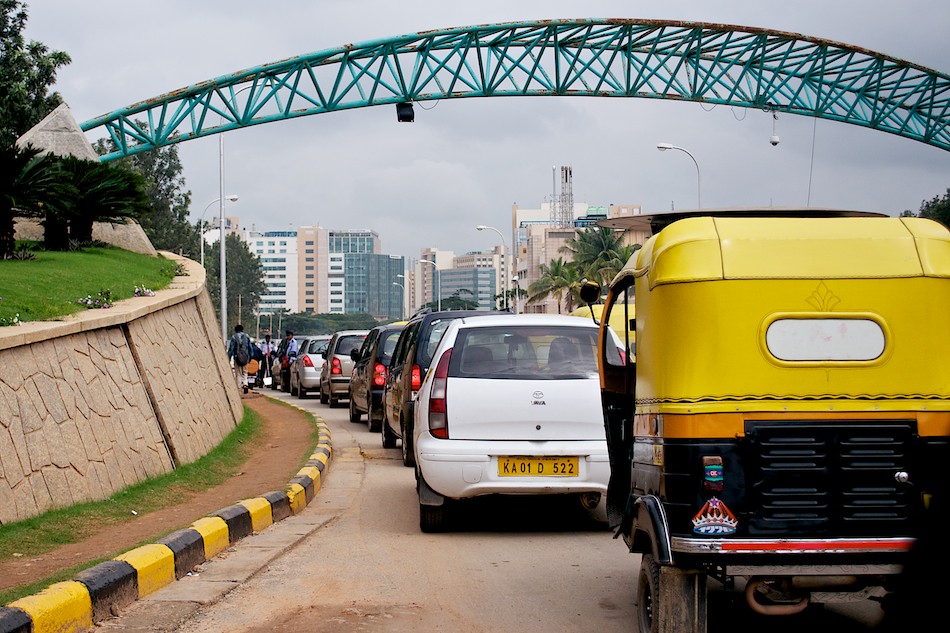 8 Waiting to have our car checked for bombs on the way into the business park. They’d stare at us for a bit, roll a big mirror under the front and back of the car, and open the trunk. Same thing at night when entering the hotel driveway. 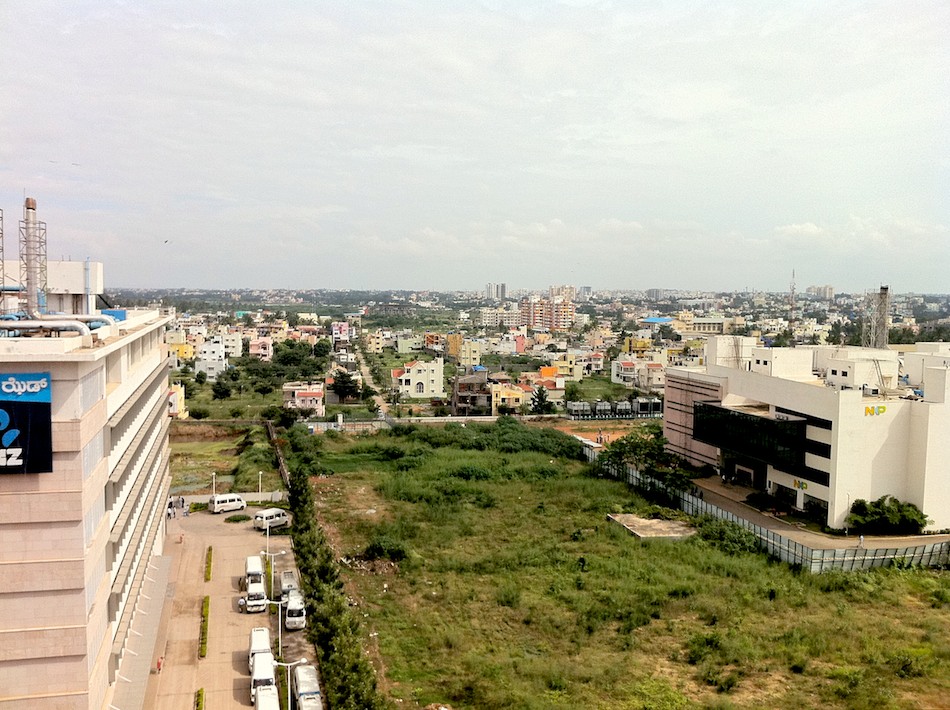 9 View from the cafeteria balcony. There was construction everywhere, except for this lot.