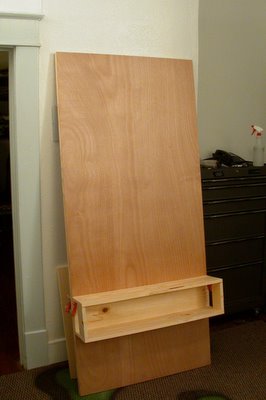 I’ve been needing an easel for a little while but I’ve held off because the cost, as well as the fact that it’s a dedicated piece of equipment, which doesn’t work so well in a small studio. I saw the studio of an artist in one of those architectural mags like Dwell or something and noticed their easel. It was very simple. A piece of plywood, a ledge (what the painting rests on), and four spring loaded hand clamps (the orange kind). 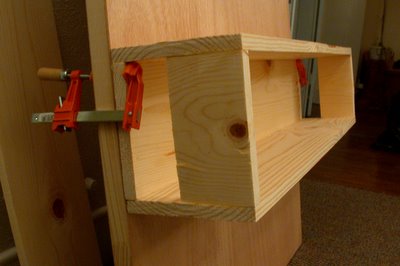 I’ve had two hollow-core doors laying around for a while that I used as level-able surfaces to do my wine/coffee drawings. They weren’t doing anything but acting as a headboard for my bed (storage), so I decided to use one of them as an easel. The total cost is around $40. Door: $20 (luan works the best because of it’s smooth surface), 2 pieces of white pine measuring 1″x8″x6′: $11, and two small clamps: around $10 (I tried the hand clamps but they weren’t strong enough for what I needed). The glue and screws I already had. I’m sure you could find some shelf type of deal that would work but I needed something heavy-duty because my stretchers are covered with masonite instead of canvas. It took about a half an hour to make. Plus it has clean lines, which I like so much because I’m a design freak.