I’m in Bangalore, India on a 2 week trip for my job (web development) and am trying to keep a log of my thoughts and experiences.This is the first installment of images, with more to come.

This is my first time out of the US (except for Niagra Falls, but that doesn’t count) and am looking forward to seeing a totally different culture. 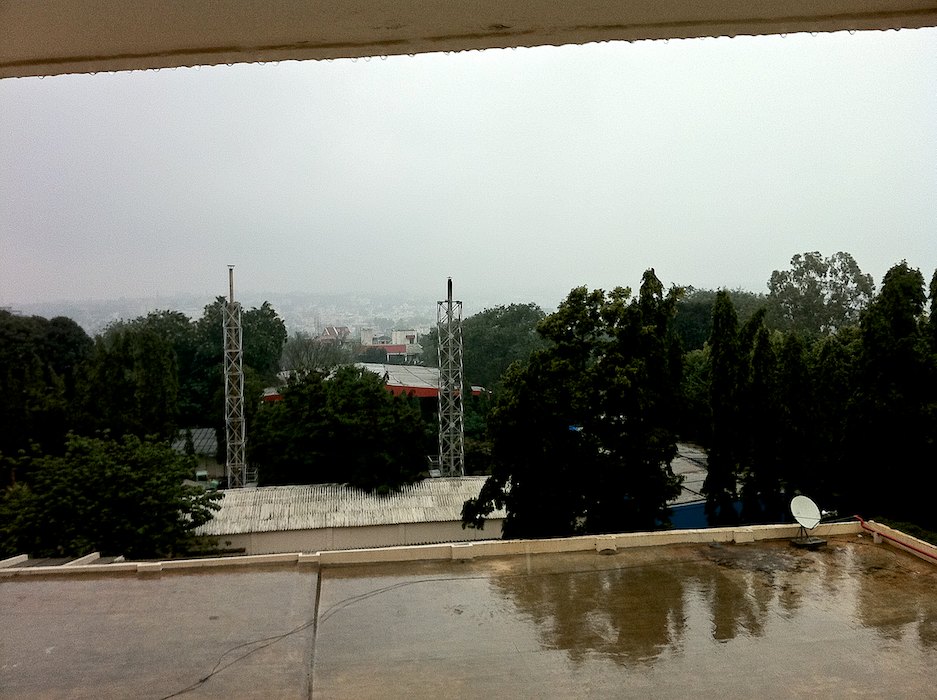 1 View from the window outside of my room.

The flights from LAX -> Heathrow -> Bangalore were pretty cramped (23 hours in total), but not as uncomfortable as I’d imagined (I’m not a small dude). There was a seat hustler (my own term) trying to get my bulkhead isle seat with some story that he just wanted to sit next to his brother. Or at least that is what I thought he said. He was grinning ear to damn ear while explaining, so I couldn’t really make all of it out. My inner Samuel L. Jackson was screaming “Yeah right, motherfucker!”. I later realized he didn’t even know the other dude. He got me back by hitting me with his fat ass/fanny pack every time he got in and out of his seat.

I’m going for the upgrade on the way back.

The cabs here = fucking mad men! It’s no wonder, the highways have yellow and black racetrack striping on each side. My guy was doing 120+ kilometers/hour all the way here. Usually not a big deal as it’s around 75-80 miles/hr, but there were cars and motorcycles all over the road. I knew inner city traffic was bad here, but I didn’t realize they also drive like nut-jobs on the highways. (If your name is Becky Fitzer, please skip to the next paragraph). We almost got smushed by multiple buses and came about 3 inches from taking out a motorcycle with 2 people on it. And I actually mean 3 inches. I was pretty scared durring that one. Not too mention the numerous red lights he ran and dirt shoulders he drove onto to get in front of everyone so he could run said red lights.

And the horns? WTF!? They beep at each other like a fucking forest of birds during mating season. When it comes to the art of driving like shit these guys make American cabbies look like my damn grandma, R.I.P.. And why do they have to straddle the lanes… constantly? Is picking a damn lane for wimps? I asked one of my Indian counterparts and he responded sarcastically with “what do you mean, lanes?”.

So, I’ve gotten about 3 hours of sleep in the past 42 hours. I’m sure the above made that clear. I hope I will crash tonight so I can get right on schedule sans lag. My chances are very good.

Saw my first head bobble! Man, it’s such a weird mannerism. At first I thought it was just something done for foreigners sake. It has a very non-committal quality that would work well to put one at ease when you had no idea what they were saying. But, they also respond to each other they same way. It’s more convoluted that I thought. I look forward to many more.

Everyone is so polite. Feels weird as it has the opposite effect on me. I feel like I’m imposing even more. I guess it’s all that genetically inherited colonialist white man’s guilt.

The classy vinyl wood flooring in my room (its uncanny resemblance to cheap-ass maple is exquisite) is freezing cold. And what I can only imagine is a cruel joke, the flexible Styrofoam® slippers they provide to walk around the cold floor barely even fit on my big toe. Needless to say, but my feet feel like little 5-headed kings.

The hotel buffet is great. The Indian food is very good to say the least. Plus, it came with a complimentary head and shoulder massage. The masseur spent most of his time on my head and I walked out of there looking like some hairsprayed-up glam rocker from the 80’s. Even worse, I went strait to the bathroom and then walked through the hotel lobby with the barn door wide open. My employer’s reputation is in good hands.

It’s very green and lush here. Plus we are having a lot of rain. I have yet to see all the Bengalore skyscrapers. I feel like I’m pretty far away from the city. Hopefully there are some places to walk to.

Anyway, good so far. Looking forward to meeting all my team members on Monday. I expect to be greeted by a sea of smiling mustaches. They take their facial hair very seriously out here. The hotel valet (really nice guy) looks as if chia pet exploded on his mouth. As an added bonus, he reminds me of every sword-wielding villain from Indian Jones. 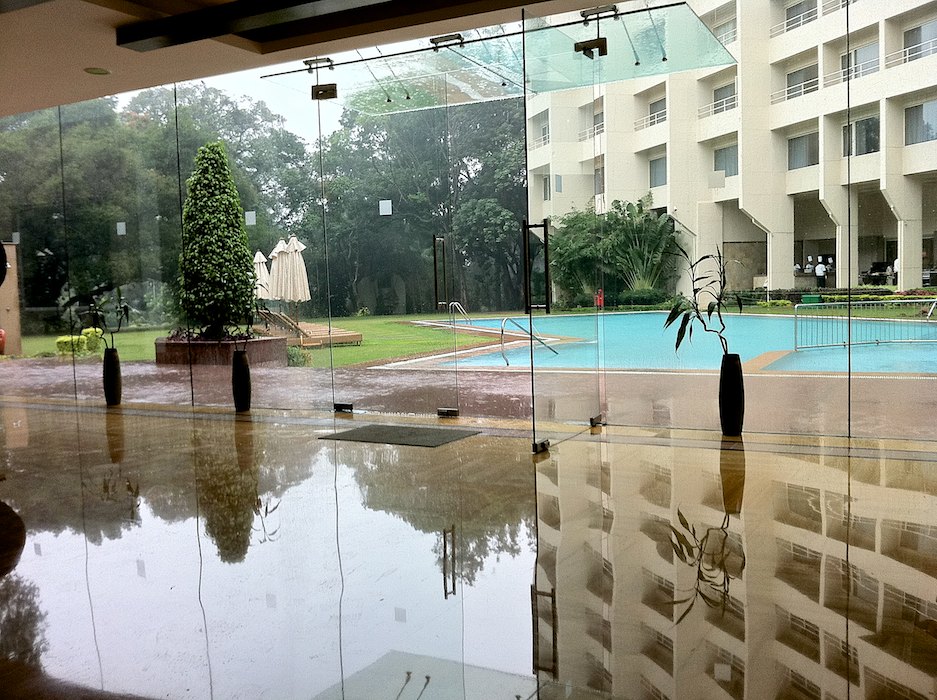 2 Waiting for my new hairdo/massage session. 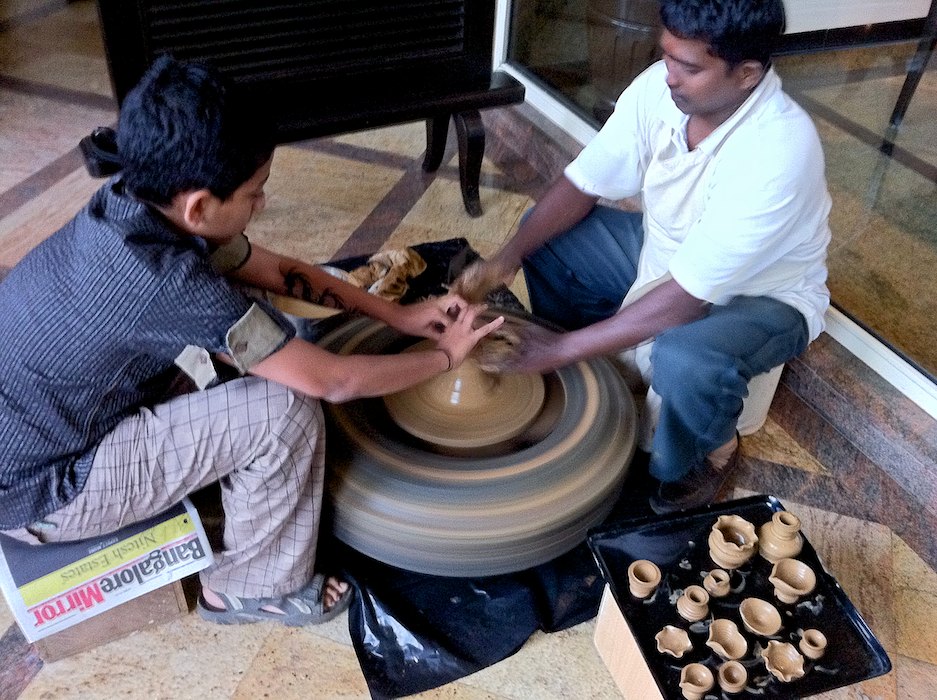 3 It was Kids Day and the hotel had some entertainment, an Indian musician who played mostly Eric Clapton (and sounded dead-on) and a potter. I couldn’t wait to give it try. The wheel is made with an old tire (the thick outer ring) and is powered by a big pole that fits into a hole where you spin it around. 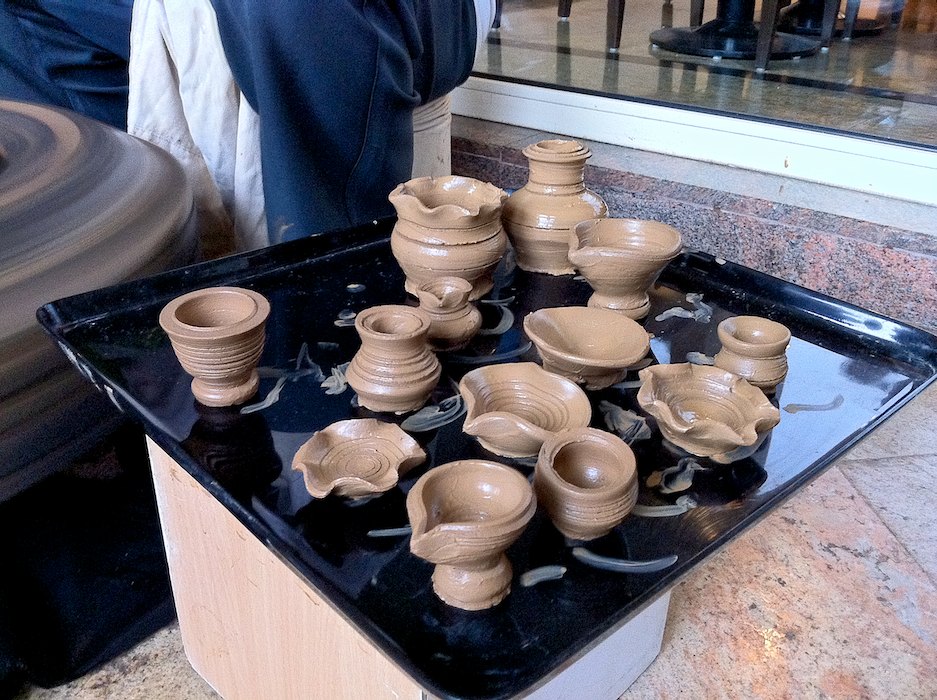 4 My pots are the 2 bigs in the back. He liked to fix my “mistakes” which was pretty interesting how are techniques differ. When I tried to make a shpe I liked he would interrupt with a “no, no, no” and do a little Ghost move putting his hands over mine. I really wanted to take my shirt off at one point. He was great and let me play for a bit. 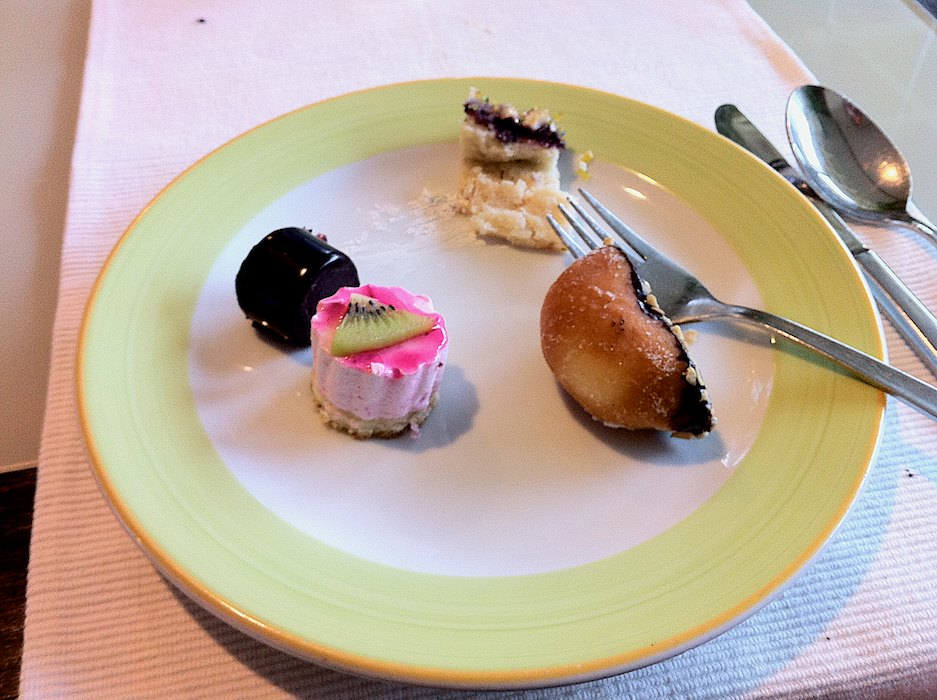 5 Little desserts from the hotel’s $56 buffet. They were very pretty and yummy.